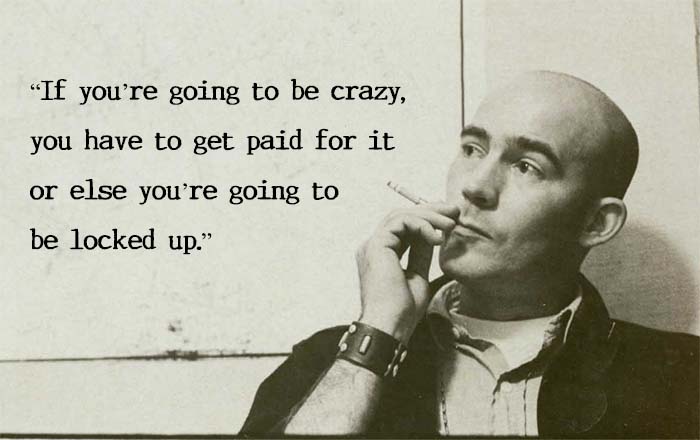 I believe the title of this website, the Proud Highway, deserves a little explanation, as it refers to one of the best, most out there writer of t the last couple of decades: dr. Hunter Stockton Thompson (1937 – 2005).

Wielding a writing style that always involved himself in the story,participating, in stead of observing, resulted in crazy yet brilliantly descriptive words. This method became known as Gonzo Journalism, a term coined by Thompson himself. He wrote classics such as Hell’s Angels: The Strange and Terrible Saga of the Outlaw Motorcycle Gangs, Fear & Loathing in Las Vegas, Fear & Loathing on the Campaign Trail ’72, and The Proud Highway: Saga of a Desperate Southern Gentleman, 1955-1967.

It needs no explanation  that the last title was the inspiration for the name of this website. As a tribute and salute to one of my favorite writers and beautiful freak. Some of my favorite quotes come from the Proud Highway:

“Every reaction is a learning process; every significant experience alters your perspective. So it would seem foolish, would it not, to adjust our lives to the demands of a goal we see from a different angle everyday? How could we ever hope to accomplish anything anther than galloping neurosis?”

“Life is not a journey to the grave with the intention of arriving safely in a well preserved body, but rather to skid in broadside, thoroughly used up, totally worn out, and loudly proclaiming, “Wow what a ride!”

You can find more quotes from the Proud Highway here.

Nearly 100 A.I. companies unite to call on the United Nations to ban autonomous weapons. Founders of nearly all the major robotics and A.I. companies, amongst whom are Elon Musk,) Mustafa Suleyman and Demis Hassabis from Google Deep Mind, and Element A.I.’s Yoshua Bengio, have called upon the United Nations for an autonomous weapons ban.  Failing to do so “would be likely to lead to a very dangerous escalation,….” according to Bengio, and “…it would hurt the further development of AI’s good applications. This is a matter that needs to be handled by the international community, similarly to what has been done in …

A proud poem part I

Hastefull are the many And reluctant are the brave. Ignorant to sacrifices while inching to the grave. Truth lasts until the end of things, yet morality is but fleeting. Take the proud highway, not the high road, if so suggest I may. For it is truth that trumps tribute terrifically, past, present, future,  unequivocally.

Trump: The Vaudeville continues. How Trumps’ Presidency is crumbling to bits.
Start your day full of inspiration and awe with this 8 minute video

One thought on “Why the Proud Highway? Explaining the title of this website.”

This site uses Akismet to reduce spam. Learn how your comment data is processed.